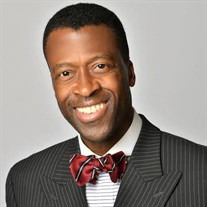 Dwayne Lavone Collins was born in Fayetteville, North Carolina on September 27, 1967. He was called Home on Sunday, August 25, 2019 in Charlotte N.C. He was the son of the late Dr. Thomas Collins Jr. & Wilma M. Collins. Dwayne was raised in Charlotte N.C. and was an alumnus of Garinger High School (Class of 1985) and Johnson C. Smith University. Mr. Collins' activism began during his college years as part of the Messengers of Truth group on JCSU’s campus in the late 1980s. Dwayne entered ministry in July 1992. He served as an associate minister under the stewardship of Reverend Dr. Sheldon R. Shipman and later became a faithful member of Greenville Memorial A.M.E. Zion Church. Collins continued on to co-found Citizens for Justice in the aftermath of the 1993 killing of Windy Gail Thompson. Over the next 15 years Dwayne served as President of the Charlotte Chapter of the NAACP and Chair of the Black Political Caucus of Charlotte-Mecklenburg. In the late 1990s and early 2000s he served as a plaintiff on behalf of Black families seeking to preserve the 1970 federal court order instructing Charlotte-Mecklenburg Schools to desegregate. In 2000, Collins was recognized as one of Charlotte, North Carolina’s most influential black men by Community Pride Magazine. His efforts to make the Charlotte community more equitable and inclusive continued up until the weeks before his death, and addressed issues ranging from disproportionate environmental burdens affecting the western half of Mecklenburg County, to a call for increased involvement of Black fathers in the education of their children. Being a true Dandy, Dwayne Collins was the proprietor of The Sartorial Servant, a wardrobe consultation service for men based out of Charlotte, that offers wardrobe consultations services. Collins possesses over twenty years of expertise in the area of men's dress. He has worked for such retail giants as Brooks Brothers, Saks Fifth Avenue, and Ralph Lauren and is held in high regard amongst many in the respective field. In the late 1990s Collins served as the host of “The Gotham Sophisticate,” a local syndicated talk show focused on fine men’s dress. He has been featured in The Charlotte Observer Style File, which highlights the most stylish men and women in Charlotte, North Carolina. He is a former men’s style columnist for Pride Magazine online, The County News Newspaper, and Q City Metro’s online magazine. Dwayne L. Collins leaves to cherish his memories, two sons Salim Collins 27 and Omari Collins 25 of Charlotte NC; Stepsister Dr. Maisha Kelly Freeman (Dr. Steven Freeman-Muhammad) of Hoover, AL; mother of his children Patrina K. Peebles; one uncle, Reverend Eugene Collins Sr. (Reverend Eliza Collins) of Charleston, SC; two aunts, Louise M. Pittman of Washington, DC and Diane Collins of Camden, SC; close friends and caretakers Niksa Balbosa, Jay Ferguson, Paris Jones, Ross Pitts and Leonard Gresham all of Charlotte, NC. He also leaves special memories to a mother-in-law, sisters-in-law, brothers-in-law, nieces, nephews, a host of cousins, relatives, friends and a community following his movement.

Dwayne Lavone Collins was born in Fayetteville, North Carolina on September 27, 1967. He was called Home on Sunday, August 25, 2019 in Charlotte N.C. He was the son of the late Dr. Thomas Collins Jr. & Wilma M. Collins. Dwayne was raised in... View Obituary & Service Information

The family of Dwayne Lavone Collins created this Life Tributes page to make it easy to share your memories.

Send flowers to the Collins family.