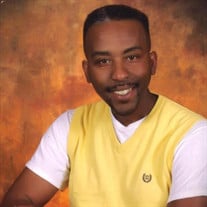 The Life Story Vincent Allen Brown, lovingly known as “Vince”, was born on August 20, 1965, in Kings Mountain, NC to Marvin and Dr. Pearlie Brown. Vincent experienced both trials and triumphs before his final rest on May 26, 2021, in Charlotte, NC. Vincent was a husband, father, son, brother, uncle, cousin, colleague, and friend. Left to cherish his memories are his wife, Carla C. Brown, daughter, Chelsey B. Brown, mother, Dr. Pearlie Brown, father, Marvin Brown, sister, Adrienne Lee-Goodwyn (Tyrone), cousins who were like sisters, Angela Mobley and Sherry Sockwell, mother-in-law, Barbara Currence, sisters-in-laws: Tonya Byrd (Scott), Gayla McDowell (Gardiner), and a host of aunts, nieces, nephews and cousins. It is our hope this written account will serve as a small reflection of God’s blessings during his time with us. Youth Vincent spent his early childhood years in the countryside with his younger sister and first cousins, playing in the yard and riding his bicycle throughout town. As a teenager, Vincent served as a lifeguard at Erwin Center in Gastonia, NC and was a basketball player in both middle and high school. Vincent liked to have fun and frequented social events; however, his mother made sure Sundays were spent at Vestibule A.M.E. Zion Church. Vincent was a member of the choir, usher board, and the Youth Adult Ministry Society (Y.A.M.S.). Vincent graduated high school in 1983 from North Gaston High School. While academics were important, Vincent was well-known among his peers for his outgoing personality and style. Young Adulthood Vincent was accepted into North Carolina State University (NCSU) in Raleigh, NC where he earned his degree in Business Administration in Spring ‘87. During his time at NCSU, Vincent pledged Phi Beta Sigma in Fall ’86, joining a brotherhood he remained connected with until his final days. Vincent also spent a lot of time at North Carolina Chapel Hill visiting his high school sweetheart, whom he married in Fall ‘87 shortly after graduation. Vincent and his wife moved to Alexandria, VA where he began his career in transportation at Roadway Trucking Company. The couple moved to Jacksonville, FL in ‘90 where Vincent continued to work in transportation, and became a father to his only child in ‘94. Adulthood Vincent, now with a family of his own, moved back to North Carolina in 1998 to reunite with extended family. Vincent continued his career in transportation, dedicating over 25 years to the industry in total. Vincent served as the Assistant General Manager for Charlotte Area Transit System (C.A.T.S.), and Manager for Mecklenburg County Transportation (MTS) in addition to other related positions. Vincent received numerous awards for his work ethic and job performance in the city. He enjoyed working in his field and took pride in being knowledgeable of both individuals and resources. Vincent loved connecting with diverse groups of people and was always willing to extend a helping hand to those in need whether through the American Red Cross, homeless shelters, soup kitchens, or personal connections. In 2000, Vincent joined The Park Church where he was baptized with his daughter as an acknowledgement of his faith and belief in Jesus Christ. In his leisure time, Vincent enjoyed traveling, outdoor activities, and spending quality time with family. Legacy Vincent began facing various illnesses that limited his capacity to work, travel and enjoy leisure activities. Vincent was challenged by this reality because of the drastic changes it caused in his daily activities; however, he continued to fight with determination and vigor. Vincent spent a lot of time with his immediate family, parents, sister, nieces, and nephews. Vincent traded long hours at the office with substitute teaching, quality time at his mother’s house, fixing cars with his dad, and helping his nephew with homework. As his final days approached, Vincent shared his wishes for a continuation of love and service among his family and friends. “I just want everyone to know I tried to help someone,” is the statement that we hope will live in your hearts and minds in memory of Vincent Allen Brown

The Life Story Vincent Allen Brown, lovingly known as &#8220;Vince&#8221;, was born on August 20, 1965, in Kings Mountain, NC to Marvin and Dr. Pearlie Brown. Vincent experienced both trials and triumphs before his final rest on May 26, 2021,... View Obituary & Service Information

The family of Vincent Brown created this Life Tributes page to make it easy to share your memories.

Send flowers to the Brown family.