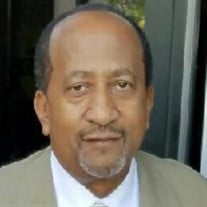 Terrance Lynn Gray was born on March 4, 1948 in Buffalo, New York to the late Robert L. and Julia May Gray. Terrence departed this earth suddenly on March 11, 2021. Terrance attended Buffalo Public Schools and was a graduate of East High School. He received his Associates Degree in Business Management from Erie Community College. Terrance served four years of active duty in the Navy and was awarded an Honorary discharge. Terrance met and married the love of his life, Jullio B. (Broadway). They remained happily married for nearly fifty years until she transitioned this life in December of 2016. They were the proud parents of two devoted daughters, Kimberly (Henry) Fountain and Priscilla (Edwin) Mason. Buffalo, New York was their home for many years where Terrance was gainfully employed at Marine Midland Bank. He was also one of the founders of the National Inner City Youth Opportunity Program (NICYO-Randy Smith League) which continues to serve the youth of Buffalo, New York. Terrence was well known at Humboldt park where the activities of the league took place. He laughed, joked and made everyone smile just with his presence. Terrance and Julie relocated to Martinsville, Virginia where they resided for several years. Terrance and Julie were faithful members of First Baptist Church under the leadership of Reverend Charles Whitfield where he was called to serve on the Deacon Board. The desire to be closer to family, especially the grandchildren influenced their move to Charlotte, North Carolina. Where they continued his walk with Christ at Greater Vision UMC under the leadership of Pastor Alexis Anthony. Terrance was not just a grandfather, but a spiritual advisor and supported each grandchild with their various interest and activities. Affectionately known as “Pops” to the neighborhood children, he was always available to assist with their needs. Preceded in death by his wife Julie. Terrance leaves one brother, Robert (Jacqueline-deceased) of Buffalo, New York; one aunt, “Aunt Nena” Hitchens of Atlanta, Georgia, five grandchildren, and one great-grandchild.

Terrance Lynn Gray was born on March 4, 1948 in Buffalo, New York to the late Robert L. and Julia May Gray. Terrence departed this earth suddenly on March 11, 2021. Terrance attended Buffalo Public Schools and was a graduate of East High... View Obituary & Service Information

The family of Terrance Lynn Gray created this Life Tributes page to make it easy to share your memories.

Send flowers to the Gray family.