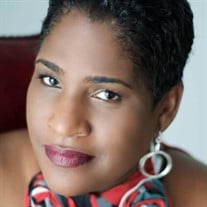 Tamatha (Tammy) Denise Greene August 31, 1966 - November 23, 2021 Tamatha (Tammy) Denise Greene transitioned from life on Earth to eternal life on November 23, 2021. Tammy, the fifth of six children and the only girl, was born in Philadelphia, Pennsylvania on August 31, 1966 to the late Bernice and Harold Greene. Her mother, Bernice would sing the theme song to the 60s TV show Tammy many months before Tammy's birth. She also loved the name Tabitha from the TV show Bewitched. So, when her one and only little girl was born, she would name her Tamatha and call her Tammy. No one could predict the powerful impact that she would have in the world of entertainment that influenced her name. She was raised in a Christian home and attended Upper Room Baptist Church in Philadelphia. Tammy was a graduate of Germantown High School where she was a committed student and member of the drill team, among other activities. She also represented the school in athletics, playing tennis and basketball. She began to hone her leadership skills in high school, which continued to evolve to higher levels in college and beyond. It was at Virginia State University where she elevated to another level of scholarship, leadership, and community impact. As a 1990 graduate, she built an incredible network of lifelong friends and business associates. The core of the immense network was her beloved Alpha Kappa Alpha Sorority, Incorporated (AKA) where she became a member in the Spring of 1987. Over a span ten years, she gave birth to the loves of her life, sons Robert Greene and Jared Jackson, who would be with her in her last hours on earth. As a financial trainer, helping global financial giant Vanguard, she trained professionals responsible for managing the customer base and assets which now total over $7 trillion. In the late 90's, Vanguard asked Tammy and a small group of colleagues to help them establish an office and training operation in Charlotte, NC. Little did they know that Tammy would have an impact on that market and other markets in the south far beyond the world of finance. After helping Vanguard thrive in Charlotte and training hundreds of professionals, she followed her entrepreneurial passion and became the "Jazz Diva," bringing the best Jazz artists to Charlotte and the Carolinas. While providing quality Jazz concerts throughout the region, Tammy taught various courses for the Urban League, and gave back by organizing the popular "Legends of Troy" scholarship fundraisers for her beloved Virginia State University. In 2019, she founded The Greene Angel Fund to raise and distribute funds to cancer organizations, mental health organizations, and HBCU institutions of higher learning. Tammy has inspired many people to step out of their comfort zone to make a positive impact in their communities while forming life long, loyal friendships along the way. She leaves to cherish her memory and powerful legacy: two sons, Robert Greene and Jared Jackson; five brothers Kenneth Greene, Stanley Greene, Rodney Greene, Timothy Greene and Howard Greene; two sisters in law, Yetta Greene and Juanita Greene; granddaughter Kashanna Martin; nieces Crystal Worthem; Brandi Greene; nephews, Rodney Greene Jr., Stanley Greene Jr., and Shawn Greene; and a host of relatives and friends. The family asked that in lieu of flowers, donations can be made to The Greene Angel Fund: https://fftc.org/donate/greene_angel_fund

The family of Tamantha Denise Greene created this Life Tributes page to make it easy to share your memories.

Send flowers to the Greene family.