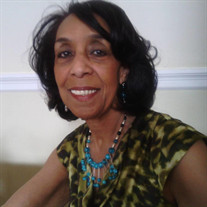 Mrs. Sue Ann Grimes Clark Reid, affectionately known as Sue, Sue Ann and Aunt Sue to close friends, family and associates. Sue was born on May 3rd, 1947, in Lenoir, NC. She transitioned into her heavenly rest on March 14th, 2022, at Novant Health Medical Center, Mint Hill, NC. Sue was the daughter of the late Maude Williams Grimes and Dallas Grimes. Sue grew up in a tight knit community of Freedman in the small city of Lenoir, NC. Sue was an active member of Smith Memorial Methodist Church (now New Covenant UMC) in Lenoir. She attended Freedman Elementary and Freedman High School in Lenoir where she was a band member who played a French horn. Sue went on to join the Job Corps in Breckenridge, West Virginia. After graduating with honors from the Job Corps, she was recruited by Senator Ayers to support him as his personal secretary in the House, Ways, and Means Committee in Washington, D.C. on Capitol Hill. Sue went on to acquire a secretarial position with Ford Motor Company in Washington, D.C. After several years, Sue married United States Military serviceman (Jimmy Clark-now deceased) and shortly thereafter they were transferred to Fort Dix, Virginia. They were later transferred to Germany on military orders. After three years abroad, they returned to the U.S. at which point Sue started her own business, Better Living Products, later known as Bestline. Sue could always be found with a beautiful smile on her face and a heart filled with love and kindness. She loved God and had a deep understanding of His love for her. Due to her innate ability to quickly interact with people on any level, her charisma, charm, smile, and pleasing personality, Bestline quickly became a very successful and lucrative business in the Philadelphia and New Jersey area. Of course, while in Philly, she became a die-hard Philadelphia Eagles fan! As her business grew, she was blessed with the opportunity to open her own storefront business called the Leather Connection in Philadelphia continuing to sell her leather garments. An experience not afforded to most, Sue was able to travel across the United States to garner more exposure for her clothing line so Sue Clark & The Leather Connection became very well-known! As a seller of high-end leather, she received many invitations from venues in various states to market her clothes in a vendor capacity. Sue worked for many years doing what she loved most until she decided to relocate to Cornelius, NC to be closer to her family. After re-locating to Cornelius, Sue became very active in the Freedman High School Class of 1965 Lenoir Enrichment Group Golf Club. She was very active, along with being a successful fund raiser for the initiative. Her efforts will never be forgotten. After moving to Cornelius, Sue met and married Mr. James Reid with whom she shared her life until her passing. As her illness progressed, James did his very best at taking care of his wife and to her every waking need. James was present at his wife’s side at the time of her passing. After her marriage and before her illness, Sue continued to receive invitations to sell her clothing at various venues across the US. James assisted his wife to continue on with the Leather Connection business, driving her to many various venues, packing and setting up for the events. Our wonderful mother and our rock, “Miss Maude”, as she was known to everyone, always told us “One for all and all for One”, which we still remember and carry on to this day. This created a bond between each of us siblings that has never been broken. We have always and always will be a close-knit family until we all leave this earthly realm. One of the most important and memorable times of our lives was looking forward to “Aunt Sue” coming home for every holiday, especially Christmas, which of course the children loved. We will never forget all of us sleeping all over the place, having fun and just loving on one another. Sue was always excited watching the kids open presents so she started a tradition allowing the kids to open one present only at 12:01 a.m. on Christmas morning, which the children still do today. Sue leaves to cherish many fond and loving memories in the hearts of her husband of four years, James Reid; four siblings: Sheron Virginia Grimes (Jenny), Dallas (June Bug Grimes, Jr., Billy Harrison Grimes, Patricia (Boo) Petty (Curtis Petty-deceased) and a huge host of aunts, uncles, nieces, nephews, cousins and many, many other family and friends who will all miss her dearly. She was preceded in death by our oldest sister Emma Lee Williams and our youngest brother Dennis (Big Moot) Jerome Grimes She also is survived by Gordon Reid (Eva), Annie R. Stewart (James), sisters, brothers, grandchildren, great-grandchildren, a host of nieces, nephews, and family friends. SUE WAS AN AWESOME LADY, A PROFESSIONAL AND VERY PROUD OF HER ACCOMPLISHMENTS, AS WAS HER FAMILY! She was the best sister ever, aunt, cousin and friend anyone could ever be blessed with! She was a role model for many of us! HER PHYSICAL BODY IS GONE BUT HER SPIRIT WILL ALWAYS REMAIN WITH US FOREVER! WE PRAY THAT WE ALL WILL SEE HER AGAIN!

The family of Mrs. Sue Ann Grimes Clark Reid created this Life Tributes page to make it easy to share your memories.