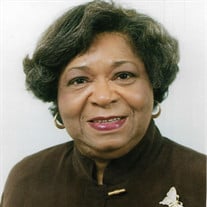 Norma Rose Young, age 84, passed away peacefully in her home on April 21, 2020 surrounded by the love and care of her family. She was preceded in death by her husband, Floyd D. Young, Jr., her parents, and her brother, Maurice Emerson Edelen. Norma, affectionately known as “Norma Rose” was born on September 5, 1935 in Indianapolis, Indiana to George Emerson Edelen and Ernestine Ruby Whitaker Edelen. Raised in a Christian home, Norma gave her life to Christ at an early age and attended Eastside Baptist Church. When Norma lost her mother during her formative years, her aunts stepped in to help raise her and she became very close to her cousins, acting as an older sister to many of them. Norma attended Charles E. Emmerich Manual Training High School and upon graduation enrolled in Indiana State University. She later transferred to Central State University. Her professional career began as an office manager for Barrington Apartments in Indianapolis. Norma met her husband Floyd in Indianapolis and they married in 1961. While in Indianapolis, Norma was passionate about serving her community. She was a member of the Corvette Club, a social club that awarded scholarships to students attending Historically Black Colleges and Universities, provided Thanksgiving dinners for families, and hosted special events and holiday parties for inner-city children. After Norma and Floyd relocated to Charlotte, North Carolina, Norma joined Friendship Missionary Baptist Church (FMBC) and remained a faithful member until her death. She served professionally in various capacities at FMBC, Friendship Credit Union, and North Carolina National Bank (NCNB). In 1984 she joined her husband in launching their food service company and served in the capacity of Vice-President and Co-Founder and ultimately President and Chairwoman. The company, FDY, Inc., began by providing quality food service programs at Historically Black Colleges and Universities (HBCUs). FDY, Inc. went on to become the first minority company to operate the food service program at Philip Morris, USA in Concord, NC. They provided service there for over sixteen years. Through the guidance and leadership of both Floyd and Norma, FDY, Inc. has expanded its portfolio to include a number of franchise brands in the Charlotte Douglas International Airport, Raleigh-Durham Airport, Norfolk Airport, and Union Station in Washington, DC. As Vice-President and Co-Founder of FDY, Inc., Norma never lost sight of her humble beginnings. The company was affiliated with HBCUs for more than thirty-five years, and established scholarship funds at each HBCU that the company serviced. Norma and Floyd’s vision and philanthropic spirit have supported the community for many years. In 2011 the Youngs received The Order of the Long Leaf Pine, North Carolina Award for extraordinary service to the State. Norma’s professional success never overshadowed her loving and charitable spirit. She was a dedicated member of The Charlotte Chapter of The Girl Friends, Inc., one of the oldest social/ civic organizations of African American women in the United States. She was a special friend to many, offering constant smiles, laughs, and hugs. She was often referred to as “Aunt Norma” as she was everyone’s favorite auntie. She welcomed college students into her home when they were unable to travel home during the holidays and made sure everyone who entered her home was well-fed and loved. Norma prided herself on being prepared for anything – she always had a gift for anyone who visited for a holiday or birthday, kept an umbrella handy, and never had an empty wallet. Her voice was always just the perfect pitch to make others feel cared for and special. She loved her family and friends dearly and her favorite pastimes were shopping, decorating her home (especially for the holidays), traveling to the Caribbean with her friends and family, her annual summer trips to the Tennessee mountains, engaging with her friends on Facebook, playing solitaire, and solving crossword puzzles. Norma’s beautiful life will forever be cherished by her son, Keith J. Haywood (Dr. Marilyn Sutton-Haywood); two grandchildren, Najla A. Haywood and Emerson A. Haywood (Randi); three great-grandchildren, Rilan Ava, Emerson, Jr., and Ean Haywood; three sisters-in-law; Ida Gist Edelen, Edna Jenkins (Willie), and Joyce Young; two brothers-in-law, Thomas J. Young (Marion) and Robert Young (Deloris); nieces, Julie Elaine Edelen, Emily Mae Edelen, Stephanie Elaine Edelen, Robin Young-Jones Pennick, Toni Young Cruickshank (Wesley), and Tammera Young; nephews, Bruce Emerson Edelen (Bonnie), Ryan Emerson Edelen, and Jeffrey Young; godson, Derek Webber, a host of cousins, college girlfriends, friends, caregivers, and church family. Funeral services for Mrs. Young will be held on Saturday, April 25, 2020 at 1:00 pm at Gethsemane Memorial Gardens, Gethsemane Memorial Gardens, 1504 W. Sugar Creek Road, Charlotte, NC, 28262. In light of restrictions due to COVID-19, only a limited number of family members will be allowed to attend the service, however the service will be live streamed and available to view on mobile devices, tablets, computers, and Smart TVs. Beginning at 1:00 pm, please use this link: https://youtu.be/LF9FEr9z98o to safely view the service. In lieu of flowers, donations may be made to the Marizetta Kerry Child Development Center, 3301 Beatties Ford Road, Charlotte, NC 28216 or online at http://www.mzkchildcare.org

Norma Rose Young, age 84, passed away peacefully in her home on April 21, 2020 surrounded by the love and care of her family. She was preceded in death by her husband, Floyd D. Young, Jr., her parents, and her brother, Maurice Emerson Edelen.... View Obituary & Service Information

The family of Norma Rose Young created this Life Tributes page to make it easy to share your memories.

Norma Rose Young, age 84, passed away peacefully in her home...

Send flowers to the Young family.