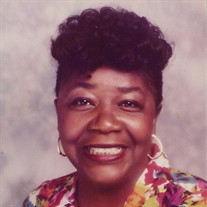 Mildred Lee Holmes was born in Charlotte, North Carolina on February 18, 1942, to the late Walter and Lillian Eddleman. Mildred was called home to be with her heavenly father on May 16, 2020. Mildred was married to the late Charlie Holmes and to this union four children were born. Many years later she was united in marriage to Mr. Howard Shankle. Mildred graduated from West Charlotte High School in 1960. In the early part of her life she worked for Color Craft for 20 plus years. Later she moved on to pursue a career as a CAN; where she last worked at South Minister Retirement Facility. Mildred was a very sweet, loving, and kind woman of God. Mildred had a passion for cooking for her family. Mildred made the best 7up pound cake and turkey dressing muffins, just to name a few. Mildred adored her kids and grandkids. The love Mildred had her family was out of this world; immediate family or extended it did not matter. Mildred would shower her love to anyone who would receive it. Mildred got to know the Lord at an early age. She was baptized at First Memorial Baptist Church where she discovered her true passion of singing for the Lord. Mildred traveled near and far singing the Gospel. Mildred late joined Reeder Memorial Baptist Church where she was a faithful member for years and sung on several choirs there. Later in life God led Mildred to join St. Phillip’s Baptist Church where she served faithfully until her health declined. Those preceding her in death were her daughter, Jacqueline Holmes and son, Gregory Holmes. Mildred leaves to cherish the beautiful memories; her husband, Howard Shankle; sons, Tony Holmes and Anthony Holmes; stepson, Howard D. Shankle (Ashley); stepdaughters, Octavia Shankle and Clara Richardson; twelve grandchildren, Chiquita Holmes and Javan Patterson (which she raised), Antonio Bradley, Channon Holmes, Ciara Holmes, Antonio Meginnis, CaChoya Holmes, Devarice Washington, Paris Williams, Shawntia Springs, Tasha Taylor, and Alexander Shankle; a host of great grandchildren, nieces, nephews, cousins, and friends.

Mildred Lee Holmes was born in Charlotte, North Carolina on February 18, 1942, to the late Walter and Lillian Eddleman. Mildred was called home to be with her heavenly father on May 16, 2020. Mildred was married to the late Charlie Holmes and... View Obituary & Service Information

The family of Mildred Lee Holmes created this Life Tributes page to make it easy to share your memories.

Send flowers to the Holmes family.