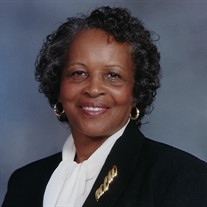 Macie Areatha (Person) Little was born on February 16, 1941. She was raised in Midland, North Carolina and attended elementary school in Cabarrus County and Kingsville High School in Albemarle. She was formerly employed as a domestic worker for many years before being employed by Scandura Conveyor Belting, in Charlotte, North Carolina. Areatha met Carver Little in 1955 and they were married on September 21, 1963. To this union were born two daughters, Janet and Joann. They bought a home in Charlotte in 1967 and have resided there since. Areatha accepted Jesus as her Lord and Savior at an early age and joined Brown Hill A.M.E. Zion Church in Locust, NC. She later joined East Stonewall A.M.E. Zion Church where she was a devoted and faithful member serving as a Class Leader, member of the Chancellor Choir, and W.H.&O.M. Society. She served faithfully as President of the Deaconess Board for 10 years and only stepped down due to the illness of her husband and her failing health. She loved Bible Study and cherished her time in daily devotions. Areatha enjoyed making crafts, shopping with her daughters, gardening and traveling, especially with her best friend, Catherine. She enjoyed preparing Sunday dinner for her family and was well known for her “sweet potato pie”. She loved spending time with her grandchildren, sharing her life experiences and words of wisdom. You never had to wonder what Areatha thought or felt. She would say what she had to say but it was always out of her concern and love for you. In other words, she was “feisty”. After surviving Breast Cancer for 41-years, in January 2018, Areatha was diagnosed with Stage IV Breast Cancer. Her true Christian character and faith was demonstrated. She was more concerned about others than she was about herself. Whenever she was asked, “How are you doing?” her ready response was, “I Won’t Complain!” As she was doing her chores around the house or working in the yard, Areatha could be heard singing or humming gospel songs. One of her favorites was, “Oh, Lord I Want You to Help Me!” When it became difficult for her to get to Church, she would worship at home in her room with singing, scripture reading, and listening to sermons on the radio, television, or Facebook. At approximately, 10:00 a.m. (her worship hour) on Sunday, March 10, 2019, Areatha’s journey ended and she entered into eternal rest. She was preceded in death by her parents, Autry Love and Franklyn McDonald Kiser and grandparents, Harvey and Mittie Person. She leaves to cherish in her memory, her husband of 55 years, Jerome; two daughters, Janet Maven (Douglas) of Paterson, NJ; Joann Baker (Samuel) of Charlotte, NC; one sister Carolyn Kiser of Charlotte, NC, five grandchildren, Erica, Desmond, Dennis, Derek, Kia; one great grandson Khai; three sisters-in-law, Marie Little, Josephine Little, Annie Lee Little, devoted friend Catherine Barbour; a special daughter Tujawana Mazyck and a host of nieces, nephews, cousins, other relatives and many friends.

Macie Areatha (Person) Little was born on February 16, 1941. She was raised in Midland, North Carolina and attended elementary school in Cabarrus County and Kingsville High School in Albemarle. She was formerly employed as a domestic worker... View Obituary & Service Information

The family of Macie Areatha (Person) Little created this Life Tributes page to make it easy to share your memories.