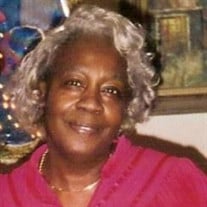 Lucille Jackson King Lucille Jackson King was born on July 11, 1932 in Newberry, South Carolina, to the late Mance Jackson and Callie B. Jackson. Lucille lived the longest of her siblings; she was preceded in death by 3 brothers, Mance Jackson, Wallace Jackson, and Ron Jackson; and three sisters, Annie Mae Daniel, Rosa Lee J. Ruff, and Hazel B. Lake. On Tuesday, March 9, 2021, Lucille softly finished her journey at the blessed age of88 she answered the call of the Lord to come home. Lucille was united in matrimony to the late Jake King, Sr. From their union she was blessed to become mother of six children, Jake King, Jr. who preceded her in death, Priscilla King Taylor, Brenda King, André King, twins Idella King and Izella King. The life of Lucille will forever be cherished in the hearts of her children. She moved to Charlotte, North Carolina, along with her sister Annie Mae Daniel. He desire was to get an education, so she started to attend night school at Morgan School. She loved to tell of her parents being entrepreneurs, her father a sharecropper and her mother a seamstress. Lucille loved her family and friends and they loved her. She always greeted family and friends with hospitality. She never met a stranger. Lucille worked as a cook at Wesley Nursing Home and Athens Restaurant. She always liked to tell the story about the time she was told that she could even make shoe leather taste good, Until the day the Lord called her home Lucille would always say, “I will be alright. I don’t know why God leaves me here on this Earth,” “All my sisters and brothers are gone, but I’m thanking God I’m still here,” “I’m old as dirt,” and “Oh boy.” Lucille King leaves a great living legacy, those left to cherish her memory are four daughters, Priscilla Taylor (Darrell), Brenda King, twins Idella King and Izella King Chardon (EJ); son, André King; seven grandchildren, Zoé Chardon, Christina King, Delvin King, Jacqueline King, Darene Taylor, Darrell Taylor, Jr., and La’Showna Taylor; 15 great grandchildren, Madison Brown, Na’Ziah Funches, Caelon King, Da’Kari King, Georgianna Mack, Darien Taylor, Jamicah Taylor, Jasmine Taylor, Jeremiah Taylor, Layla Taylor, Amiah Williams, Ashton Williams, Aspen Williams, Austin Williams, and Autumn Williams; three great great grandchildren, twins Da’Kari King, Jr., duane King, and Harley Wilson; a host of nieces, nephews, great nieces, cousins, in-laws, friends and family. John 1:3 And if I go and prepare a place for you, I will come again, and receive you unto myself; that where I am, there ye may be also.

The family of Lucille Jackson King created this Life Tributes page to make it easy to share your memories.

Send flowers to the King family.