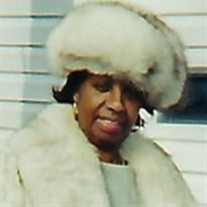 Her worth is far above rubies… Lucille Ford Black went home to be with the Lord on an early snowy Saturday morning on January 29, 2022. She was born on October 9th and is preceded in death by her parents Isaac and Ella Ford, along with her four loving brothers: Isaac Jr., James, Hubert, and Calvin. Lucille grew up in the historic Brooklyn neighborhood where she attended Second Ward High School. She was preceded in death by her beloved husband Nathaniel Black, Sr. whom she was married to for over sixty years! They rise up and call her blessed Out of their union, the Lord blessed Lucille and Nathaniel with three beautiful children and was preceded in death by daughter Ella Laynett and son Milton. She leaves behind one surviving son Nathaniel, Jr. (LaTricia) to cherish her memories. Additionally, to grieve her loss are grandchildren Donald, Jr. (Lisa), Marlon (deceased), Nathaniel, III, Marcus, Great-grandchildren DaShawn, Trinity, Donquarius, and ZaVale, three Great, Great-grandchildren, a brother-in-law Hiawatha, and a host of other relatives, Godchildren, and special friends. A woman that fears the Lord … At an early age, Lucille’s parents set the example of reverentially fearing God. As such, she and her husband Nathaniel shared her parents’ sentiments. Lucille was a lifelong devoted member of New Emmanuel Congregational United Church of Christ where she and her family diligently served for decades. She had a beautiful humble spirit, a servant’s heart, and an unconditional type of love towards all. She had a passion for serving others and was always willing to assist as needed. For decades she served in numerous leadership roles and was a dearly devoted missionary and usher. Without a doubt, Lucille’s faith was steadfast, immovable, and always abounding in the work of the Lord, and her labor was not in vain! She shall be praised Lucille was a pillar of the community and owner of Lucille’s Grill and Kings & Queens Boutique. Up until her passing she continued to offer male and female merchandise and clothing, especially to the local mortuaries. For nearly forty years, the Blacks were owners of the historic Kings & Queens Restaurant Club & Lounge. Over the years, at election time they loved to get involved and hosted numerous local, state, and national fundraisers at the club. In a September 6, 1998, Charlotte Observer Mecklenburg Neighbors cover story it stated: “People tend to gather at the Blacks home for many a supper and long talk into the night about politics, needs in the church or community, and ways to help the downtrodden…” Lucille had a passion for basketball which started when she was a player while in school. The love of this sport carried throughout her life as she was a diehard Charlotte Hornets and Golden State Warriors fan. Steph Curry was her favorite player. Lucille also enjoyed football and every Sunday, you could find her cheering on her beloved Cam Newton and the Carolina Panthers. Her other hobbies included traveling, playing cards, bingo, baking cakes, watching soap operas, and daily talks with her family and friends and especially spending time with her Great-grandson ZaVale!

Her worth is far above rubies&#8230; Lucille Ford Black went home to be with the Lord on an early snowy Saturday morning on January 29, 2022. She was born on October 9th and is preceded in death by her parents Isaac and Ella Ford, along with... View Obituary & Service Information

The family of Lucille Ford Black created this Life Tributes page to make it easy to share your memories.

Her worth is far above rubies…
Lucille Ford Black went home...

Send flowers to the Black family.