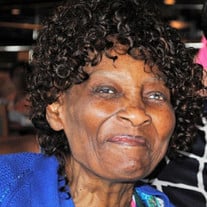 Harriett Lee Douglas, 77, died on Sunday, December 8, 2019. Born April 8, 1942 to the Late Otis Eugene Douglas Sr. and Annie Lee (Cowan) Douglas, she is a homemaker. A native of Charlotte, North Carolina, Harriett graduated from Governor Morehead School in Raleigh, NC. Though Ms. Douglas was born with a visual handicap, it never stopped her from enjoying life to the fullest. From a young age and instilled by her mother, two of her favorite pastimes were composing music on her keyboard and singing. You could always count on getting her rendition of ‘Happy Birthday’ on your special day. She also was an avid bowler and would let you know about it when she was rolling a good game. Despite her vision, her favorite thing to do was to play cards, specifically ‘Pitty Pat’. As she was quite good, again you were going to hear about it. Despite her competitive side, Ms. Douglas had a heart of gold. She always would lend an ear if you needed to talk and if she could she would help anyone in their time of need. As a mother, sister and friend, despite her many life challenges, she would take time to check on you and make sure that YOU were doing ok. Harriett is survived by: Four Children (Percy Hargrove (Brandywine, MD), Tracey Jordan (Brunswick, MD), Daron Hargrove (Kimberly) and Jennifer Hargrove, all of Charlotte, NC); Seven grandchildren; brother, Otis E Douglas Jr; and two sisters, Sandra Holloway and Regina Jackson. She is further survived by a host of nieces, nephews, other relatives and friends. Ms. Harriett L. Douglas will be missed, and her memory will be fondly in our hearts forever.

The family of Harriett Lee Douglas created this Life Tributes page to make it easy to share your memories.

Send flowers to the Douglas family.