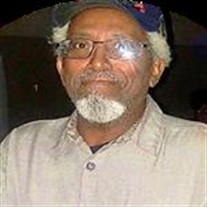 Harold James Jackson was born on August 6, 1949 to the late Lessie Mae and James Bruce Jackson in Montgomery, Alabama. He was raised in Montgomery, Alabama, Fort Walton Beach, Florida, and the Bronx, New York. He graduated from Morris High School in 1967 in New York City. Harold met his wife Helen, of 53 years, through his cousin and best friend. Two years later, they were married on March 23, 1968. From this union they have four children: Chermel Davis (Trevor), Charlene Jones (Ollie), Michael Jackson (Lorraine) and Omeaka Jackson. They are Blessed with eight grandchildren: Shaquille Jackson, Shakima Schoolfield, Adriana Blackwell, Kevin Partridge, Jr, Maurice Jackson, Myasia Jones, Harold Jackson and Jaden Jones: and four great-grandchildren Camden Gibbs, Kennedy Schoolfield, Brixton McClanahan, and Gianna Smiley. After the birth of their youngest daughter, Harold and Helen moved to Cambridge, MD where his father resided. It was here that he would start his path to becoming the World’s Greatest Dad. Known as Dad, Uncle Pop, Pop Pop, Poppa Harold, Uncle Harold and most famously “Major Dad”, he was a great father to his children and a surrogate father to so many more. He and Helen open their doors to everyone in need from Cambridge, Maryland, Dover, Delaware, Springfield, Massachusetts, Phoenix, Arizona all the way to Charlotte, North Carolina. With Harold and Helen, you always had a place to lay your head and to get something to eat…and even if your car broke down, he could help you with that too. Harold guided several young people on their journey into adulthood through helping them enlist in the military, find jobs, or simply buying a new car. He always had words of wisdom and great advice. In his lifetime he was employed as an orderly, postal worker, dialysis technician, military security police and a veterans affairs police officer. However, to know him is to know that he was truly a dedicated soldier serving his country for 32 years with an honorable discharge at retirement. He served in Vietnam, Desert Storm, Iraqi Freedom and Afghanistan. Harold traveled the world with the United States Air Force, and he earned many accolades during his years of service. With all that he gave, he always had time for his family and the most important person of all, his wife Helen. Life as retirees was a vacation for them. The two were known for hitting the road to go visit family or traveling to some resort for a quick getaway. Their favorite pastime was visiting casinos, hanging out with the grands, watching the news, meeting new people, catching up with the family, talking over a cup of coffee and dancing the hustle; we dare not say “or fixing something” for Harold. To continue celebrating his life he leaves his wife, children, grandchildren, great grandchildren, sisters: Linda B. Williamson, Dorothy Jean Pride, Louise Griffin, Deborah Whittington, Francine Bamberg, Vanessa Whittington, Sandra Ballou-Jackson, Brenda Jackson, Debbie Jackson, and Shantel Wright; brothers Willie Ray Jackson, Mickey Jackson and Lenny Bamberg and Aunt Marie Jackson. Prior to Harold’s homegoing, the sun set on Ann Foreman, Joyce Rodriguez, Jeanette Kersh, Willie James Jackson, Sr., and James Bruce Jackson Jr., Mamie C. Hall-Jackson, Geneva Bamberg, Leroy Jeter, Leroy Bamberg, Charles Bamberg, Murray Bamberg, Alean Preston, one niece, four nephews, and one bonus grandson.

The family of Harold James Jackson created this Life Tributes page to make it easy to share your memories.

Send flowers to the Jackson family.