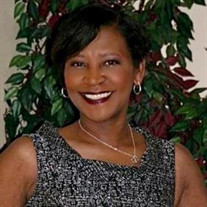 Frances Elizabeth Rawls was born on March 9th, 1953 to the late Calvin F. Tate and Pauline Tate. Her big personality was born in Pittsburgh, PA. Her big sister & only sibling, Doleta Brown, affectionately nicknamed her “Sissy” and the name stuck. Sissy was the perfect nickname for the sassy little girl that grew up to be the DIVA we all knew and loved! The family relocated to New Jersey where Frances was educated in the public-school system. She loved singing and when it was time to choose a high school, she auditioned for the School of the Arts, (Arts High School) where she was accepted into their musical program. While she was in high school, Sissy met who would be her husband. They married when she was just 18 and Frances forged a life for herself & her family. As a young military family, there was always a possibility of relocation. Frances worked hard to make sure that no matter they lived, it always felt like home. The marital union ultimately produced four children, Shannon, Milton II, Shalonda and Tia. She was known as fierce fighter for her children. Everyone knew this… ESPECIALLY her children! They could often be heard exclaiming to anyone that dared challenge them… “CALL MY MAMA!” Nobody worked or played harder than Sissy! Wherever she worked, she was promoted. She spent most of her career with NJ transit where she held several key positions. She transitioned from that field into culinary services where she worked with nursing homes planning and creating meals for the residents. Even though she worked hard, she loved having a good time! Sissy was known as the life of any party! She loved to sing, dance and have a good time. Even in church, where she served as the Mother of The Greater Purpose Life Center. She loved having a holy ghost good time! She also took those good times on the ocean, when she caught the travel bug and became a cruiser! Her and a group of friends would often go on trips just living and loving life! Sissy lived, laughed and loved hard! When she was for you… she was for you! On February 9, 2021 the Lord saw fit to call her by her name and release her from labor to reward! She leaves to cherish her memory her children, Shannon DeWitt and her husband Carlas (Wink), Milton Rawls II and his wife Janet, Shalonda Maldonado and her husband Carlos and the baby of the group, Tia Rawls. Her eleven grandchildren, Tristen, Katherine, Taylor, Eli, Andrew, Shayne, Aaren, Avery, Addison, Alex and Milton III. Her five great grandchildren, Azariah, Ethan, Evan, Amir and Christian. One sister, Doleta Brown and her children Desiree, Rashann and Tekea. Frances (Sissy) had a host of friends and family who loved her dearly. Your name may not be written here but best believe it was etched in her heart and now rests with her.

The family of Frances Rawls created this Life Tributes page to make it easy to share your memories.

Send flowers to the Rawls family.