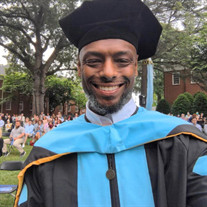 Life Reflections Dr. Eric T. Ward, Sr., of Charlotte, NC, departed this earthly life to enter eternity with our Lord and Savior, on Wednesday, September 22, 2021. Born in Whiteville, North Carolina, he was the son of Kenneth Ray Young and the Late Veronica Ward. Dr. Ward was a beacon of hope and happiness to those who were blessed to know him. It was his infectious personality, his quick wit, and passion to serve others that made interactions with him unforgettable. Eric graduated from West Columbus High School in 1993, where he was a standout in track and field. He was a bright, well-rounded student whose athletic accomplishments led to a track and field scholarship at the University of North Carolina Charlotte. Not only did Eric excel in track and field, he also performed well academically. As an undergraduate, he studied Mathematics and earned a B.A. in Mathematics and Statistics in 1997. His love of learning and desire to elevate others led to an incomparable career as a trailblazing educator in Charlotte-Mecklenburg Schools. After graduating with his degree, Eric became a Mathematics teacher at Independence High School. He was soon able to combine his love of young adults with his prowess for running when he began coaching track and field at the school. He modeled excellence and high expectations; this was evident in his classroom and on the track field. During his tenure as coach, the student-athletes who he led won two team and 17 individual 4A championships. One of the nationally ranked sprinters from Independence High School, who Eric nurtured as a student, now serves as a teacher and head track and field coach at Harding University High School. This serves as a testament to the unbreakable bonds and relationships Eric made with the countless young people he encountered. Always a leader, it was no surprise when Eric became an assistant principal at West Mecklenburg High School in 2005. He loved the schools on the west side, serving as principal at Wilson Middle School (2008-2011) and West Mecklenburg High School (2011-2014). In 2014, he led the Technology, Engineering, Advanced Manufacturing School at Olympic High School. He returned to his beloved west side, where he became principal at Harding University High School in 2015. Principal Ward was a visible, energetic leader who could be seen around his schools, repairing items, leading the crowd during a pep rally, or providing a listening ear and guidance to a staff member or student. His students and staff will not forget his traditional holiday suit which he wore with style and confidence. It was his desire to bring cheer and joy to those around him. Always determined to improve himself and those around him, Eric continued his education earning a M.A. in Secondary School Administration at Gardner Webb University (2004), a Specialist Degree in Educational Leadership (2016) and a Doctorate of Educational Leadership (2020), both from Wingate University. For all his accomplishments, it was his family that Eric cherished the most. On September 17, 2010, Eric married Sophia, the love of his life. His daughter, Kabrea, is completing her Undergraduate Degree in Exercise Science and will begin working on her Doctorate of Physical Therapy-Grad at Winston-Salem State University. His son, Eric. Jr, a 4th-grader at South Academy of International Languages who is learning Mandarin. His children truly made him beam with joy and happiness. Always the innovator, Eric and his wife led successful businesses: Utopian Travel and two hair salons. Eric was initiated into Mu Tau Chapter of Alpha Phi Alpha Fraternity, Incorporated, at the University of North Carolina-Charlotte in the Spring of 1995. Later becoming an active member of the Charlotte Graduate Chapter, Beta Nu Lambda. Eric loved fishing, coaching young athletes, home-improvement projects, technology, riding all-terrain vehicles with his brothers and father, cooking, and spending time with family. A man of unwavering faith, Eric studied the Word, lived by God's teachings and served as a prayer warrior for many. Eric leaves to cherish his memory his wife, Sophia. His daughter Kabrea, his son Eric Jr, and his Godson, Tashion. His father Kennth Ray Young and Stepmother Peggy Young. His brothers; Dante Covington (Kishinda, Danika, and Fallon); Kendale Young (Audrey; Kennisha, Kendale Jr); Shalella Love (Mikayla, Megan, Hannah and Avery); Jermetrisius (Jill; Jeremiah); Deidra McKenzie (Chester; Kyleigh and Kiley); ShaKema Covington (Joziah, Cornelius, Jeiel, and Regenae); Transit Young; and Terrance Covington (LaRhonda), A special brother/uncle, Kenya Young; Grandmother, Loucinder Young; a close uncle Cepheus Ward and a host of Uncles, Aunts and cousins.

Life Reflections Dr. Eric T. Ward, Sr., of Charlotte, NC, departed this earthly life to enter eternity with our Lord and Savior, on Wednesday, September 22, 2021. Born in Whiteville, North Carolina, he was the son of Kenneth Ray Young and the... View Obituary & Service Information

Live stream will begin at 1:45pm website homepage, scroll to bottom and click on the F logo will take you to the Live feed right at 1:45pm

Send flowers to the Ward family.