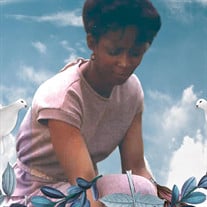 …But as for me and my house, we will serve the Lord (Joshua 24:15). In the early morning of December 11, 2020, Deborah Ann Hall-Perry was called home to be with the Lord. Deborah, the eldest child of four from Taft Hall and the late Florine Hall, was born on Wednesday, April 18, 1951 at Coney Island Hospital in Brooklyn, NY. Deborah, known to many as Deb, Debra or Evangelist Perry, was gifted for greatness right from birth. Besides being extremely book smart, Deborah had a sincere passion for singing. At the age of 6 years old, she sang in the Brooklyn Museum choir when the average age to join the choir was 9 years old. She attended Franklin K. Lane High School in Brooklyn, NY and sung on the school choir. Additionally, she was recruited to sing on the Infamous All-City Concert Choir. The All-City Concert Choir was known for taking the best voices from various schools to form one of the most talented choirs in New York. With this choir, she was able to sing at Carnegie Hall and other noted halls and arenas. Deborah was always sought after to sing on many occasions at various events. In July of 1968, Deborah met and eventually fell in love with her soon to be husband, Lincoln Perry. Deborah and Lincoln had their first and only child Craig; and were married on her birthday in 1975, at Saint Peter Claver Church in Brooklyn, NY. Besides singing, Deborah was also passionate about education, teaching and ministering to the youth. She attended and graduated from Fordham University where she received her bachelor’s degree in psychology. Although she had received a full scholarship with all expenses paid to continue her education at Fordham University to obtain her master’s degree, she instead chose to raise her beloved son. She taught for the New York City Board of Education for 17 years, before relocating to North Carolina, where she continued to teach with the Charlotte Mecklenburg school system for another 10 more years before she retired. If anyone knew Deborah, they knew she genuinely loved the Lord. In fact, her love for God was her first love. She was baptized and first received Christ in the early 70’s. She became an ordained minister in the early 90’s and continued ministering and preaching to others daily until God called her home. Often, she would use her passion for singing to begin her sermons with a hymn. Deborah was known for being generous, loving, caring, and selfless. She was truly one of a kind. She had a gift for touching lives and always putting someone else’s needs and concerns before her own. She was a student of the bible, but always enjoyed seeking the Lord, and had a quest for studying various Christian literature. Deborah loved and followed the Lord so much that you would have thought she was the 13th disciple. She ministered to numerous people and lead many souls to Christ. She aspired of furthering her ministry, but unfortunately her health began to decline in the latter months of 2016. She was later diagnosed in 2018 with a rare neurodegenerative disorder called Multiple System Atrophy (MSA - C). In short, this disease rapidly shrinks and deteriorates your muscle and nerve tissue. Even while in tremendous pain, Deborah never once complained as she stayed firm in her belief for her healing from God. While her family and loved ones hoped that her healing would take place here on Earth, God already knew his angel would receive her ultimate healing along with her wings in Heaven. Deborah’s life, love and legacy will continue to be cherished and remembered by her husband Lincoln Perry; Father Taft Hall, son Craig Perry, grandson Javonne Perry, grand-daughter Jazsmyn Perry, great grand-daughter Milan Perry, brother Gregory Hall, nephew George Simpson, and a host of family, friends and loved ones. Deborah will be greatly missed, but never forgotten. Rest in Peace, Rest in Power, Rest in Paradise. We will always love you and will forever hold you in our hearts.

&#8230;But as for me and my house, we will serve the Lord (Joshua 24:15). In the early morning of December 11, 2020, Deborah Ann Hall-Perry was called home to be with the Lord. Deborah, the eldest child of four from Taft Hall and the late... View Obituary & Service Information

The family of Deborah Ann Perry created this Life Tributes page to make it easy to share your memories.

Send flowers to the Perry family.