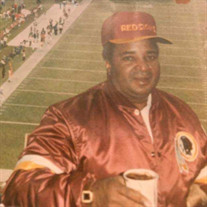 Carver Jerome Little was born on January 29, 1937. He was raised in Matthews, North Carolina and later moved to Charlotte, North Carolina. He attended elementary school in Mecklenburg County and graduated from J.H. Gunn High School in Charlotte, North Carolina. After high school he served in the United States army and was honorably discharged in 1962. While serving in the United States army he was awarded a Good Conduct Medal and completed Military Course B training. He began his employment at Harris Teeter as a truck driver and Warehouse Worker (Produce), where he was a faithful employee for 38 year and later retired. Jerome met Areatha Person in 1955 and they were married on September 21, 1963. To this union were born two daughters, Janet and Joann. They bought a home in Charlotte in 1967 and have resided there since. Jerome loved professional football. His favorite team was the Washington Redskins, a.k.a. Mr. Joe Gibbs himself. His affection love for NASCAR racing gained the attention of his family where many begin their love of the sport. His favorite race car driver was Richard Petty. Jerome was very famous for his many quotes, “In any event”, “REATHA”, “Captain”, “DEM Skins”, “Produce!”, “Simple as That”, Famously known when ending a conversation was “Toodle-Loo”, Jerome expressed a true love to his family. Because of his love and affection for his family and friends, he had special names where he was known as “SON”, “Jeromino”, “Love Man”, “J-Rome”, “Rome” and “GRAND-DADDY”. After surviving a stroke in 2002, his health slowly begin to decline. But he still kept pushing on daily until the end. He was a fighter and fought a good fight. We appreciate the care giving team from the VA Home Base Care, Mr. Bertrand, Ms. Gladys, Hospice of Charlotte team Felicia, Mark, and James, Souvella and special thanks for his granddaughter Kia for being in the home every day. At approximately 9:28PM (the same day as his wife, 2nd Sunday in March, he went to his heavenly home to be with “Reatha” surrounded by his family. He was preceded in death by his wife of 55 years, Areatha Little, his son Dennis Young, parents Roy and Dewie Little, brothers Joe Louis, Roy Lee, Charles MacDonald, and sister Vera Lavonne. He leaves to cherish in his memory two daughters, Janet Maven (Douglas) of Paterson, New Jersey; Joann Baker (Samuel) of Charlotte, North Carolina; one sister Souvella Little of Charlotte, North Carolina, five grandchildren, Erica, Desmond, Dennis, Derek, Kia; four great children Khai, Faith, Hope, Maliyah, Erica’s expecting arrival – Baby Bean, two sister-in-laws, Josephine Little, Annie Lee Little, devoted cousin and friend, Glenn Kiser and a host of nieces, nephew, cousins other relatives and many friends.

The family of Carver Jerome Little created this Life Tributes page to make it easy to share your memories.

Send flowers to the Little family.