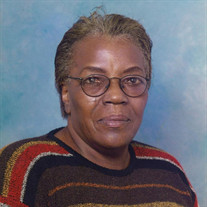 Betty Sherrill McCorey, affectionately known as &#8220;Big Mama.&#8221; Ever since January 31, 1941 this world witnessed a very outspoken, took care of everybody, a shoulder to cry on, cooked like she had a restaurant, and a person you could... View Obituary & Service Information

The family of Betty Sherrill McCorey created this Life Tributes page to make it easy to share your memories.

Send flowers to the McCorey family.