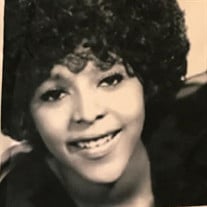 Ms. Barbara Ann Alston was born on December 29, 1943 in Baltimore, MD. She was the daughter of the late Ethel Banks Alston and John Westry. On Friday, February 16, 2018, God sent an Angel to silence her lips and bring her home to reign with him in heaven. As a child, Barbara relocated to Brooklyn, NY with her mother. She was educated in the public schools of Brooklyn, NY; graduating from William H Maxwell Vocational High School in June 1961. Barbara excelled in shorthand and typing. Barbara and her friends shared a love and excitement for reading. As a result of her excellence in school, she was a member of the Honor Society. Barbara developed a love for singing at an early age and was a member of the High School Choir. She would also participate in talent shows with her friends, who eventually became her group members. In 1960 Barbara, along with four of her friends, formed the legendary girls group “The Crystals.” As the original lead singer, Barbara’s melodic voice can be found singing lead on their first two hits; “There’s No Other Like My Baby” and “Uptown.” One of the “The Crystals” most well-known hits is “Da Do Ron Ron.” Barbara was employed by the Institute for International Education in the UN Plaza in New York City, before her singing career advanced. Barbara eventually relocated to Charlotte, NC to rear her family. Barbara was employed with Duke Power and Atlantic Assurance as a title examiner. In September 2007, Barbara published an autobiography entitled “There’s No Other.” Barbara had a passion for crafts and playing Bingo. She enjoyed knitting, painting, completing crossword puzzles and assembling very large puzzles. She was preceded in death by her parents and oldest child Tony Perry Alston. Ms. Barbara Ann Alston leaves to cherish precious memories: two daughters, Donielle Prophete, of Charlotte, NC and Kemberly Pitter, of Coconut Creek, FL; one son; Kenneth (Elena) Pitter Jr, of Parkland, FL; five grandchildren, Darylron Camps Jr., Antoine Smith, Kennedy Smith, Avianna Pitter and Jaden Pitter; seven great-grandchildren, Demario Camps, Kamia Camps, Kamya Doby, Nylla Camps, Kahmaria Wingard, Peyton Dunbar and Darylron Camps III; a special sister, Jacqueline Dixon of Queens, NY; one aunt, Louise Triplett; three very special “like son-n-laws” Damien Evans, Darylron Camps Sr. and Raymond Jones; a devoted friend and caregiver, Terry Lockhart ; her former group members of “The Crystals” and a host of other loving relatives, dear friends and fans, all of who join with the family in sharing the grief caused by her departure.

Ms. Barbara Ann Alston was born on December 29, 1943 in Baltimore, MD. She was the daughter of the late Ethel Banks Alston and John Westry. On Friday, February 16, 2018, God sent an Angel to silence her lips and bring her home to reign with... View Obituary & Service Information

The family of Barbara Ann Alston created this Life Tributes page to make it easy to share your memories.

Send flowers to the Alston family.