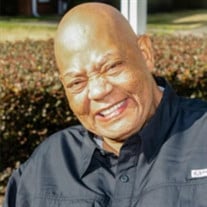 Alton Guidel Big Al | Bootsie Alton Guidel, Big Al, Bootsie was born Durham, NC on November 4, 1945. He was the oldest son of Lucille Green and had three sisters – Jackie Leitzsey, Sandra Faison and Debra Allen and a younger brother David “Dawud” Wheeler. Alton obtained a position in the NY garment center as a sample clerk directly after graduating High School. It was there that Alton was introduced to the world of business and soon discovered he had a talent for talking and interacting with all types of people. Alton took his talents and became a super salesman for White Plains Photo Studios. Alton achieved great success there and found his calling. Selling was in his blood. He quickly became the Studio’s top salesman and later the trainer of all new sales associates. Alton eventually ventured out and started his own successful photography studio which he operated for over 40 years. In 1986 Alton moved to the heart of Brooklyn, Bedford Stuyvesant. As always Alton was his engaging self and quickly made friends with his new neighbors. He married a wonderful woman named Barbara and became a stepfather to her four sons who adored him. He was not only a father-figure to their sons, but many of the other children in the neighborhood who referred to him as Mr. Al, while the adults referred to him as “The Mayor”. He was always willing to assist and help a neighbor in whatever way he could. After losing his wife to asthma, Al met his soulmate Lydia Billups and from this union came his true legacy, Imani Guidel-Gaymon, who he could not stop talking about with tremendous pride. When the grandchildren arrived… it was a wrap. Alton was a visionary, thinker, and tactician. He played chess with some of the great NYC “street” chess players for money and sport. Al would play chess all day long and eventually started spotting his opponents pieces to keep the game interesting and competitive to him. This love never died and continued after he moved to North Carolina to be near family. Even through his final days, you could usually find Al in the game room at Prosperity Creek Senior Apartments looking for some friendly competition. The fever of the 2007 election sparked Al’s inner political activist. He was determined to do his part in getting the first black man elected president and he frequently spoke the merits of Barak Obama with anyone who he “rolled up on” – young, old, black or white. To this end he continued his political pursuits by serving as the 128th Precinct Chair for the Mecklenburg County Democratic Party. In this role he tirelessly worked to assist with voter outreach, registration, education and arranged transportation to take voters to the polls. One of his fellow residents noted that Alton was an inspiration in the building and that he did more in his motorized chair than many “of us” walking around. “He was like a wheelchair activist in his own pleasant way to make sure we were excising our rights and privileges to vote.” Alton is survived by his brother and sister David “Dawud” Wheeler and Sandra Faison. His partner Lydia Billups, who blessed him with his only child, Imani Guidel-Gaymon. Three grandchildren – Amari Harmon, Jazelle Harmon, Legend Gaymon and son-in-law, Cornelius Gaymon. His stepchildren, Shawn Billup, Carrie Billups and stepgrandson Kareem Billups. Alton has eight nieces and nephews (in birth order) – John McDonald, Darryl Leitzsey, Michael “Sayid” Muhammed, Julie Early, Kimberly Allen-Hardy, Paul Green, Julia Burgess and Leslie Brown. He also leaves behind a host of great-nieces, great-nephews, cousins, and countless friends who all miss him deeply and the sound of his melodic voice singing Moody Mood For Love “there I go, there I go, there I go, theeeerrrrrreeee I gooo…” trailing behind him.

The family of Alton B. Guidel created this Life Tributes page to make it easy to share your memories.

Send flowers to the Guidel family.