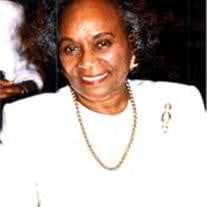 CHARLOTTE - Home Service for Almeda Vivian Hunt Rippy, 93, will be held on Saturday, March 2, 2013 at Little Rock A.M.E. Zion Church at 12 noon.  Visitation 11:00 a.m.Home Going Service is 12 noon Saturday, March 2, 2013 Little Rock A.M.E. Zion Church 401 North McDowell Street Charlotte, North Carolina. Interment will be held in Oaklawn Cemetery. Almeda Vivian Hunt Rippy died February 25, 2013 at Mercy Hospital, surrounded by her family. She was 93 and had lived in Charlotte for 67 years. She was the widow of Coleman Dupont Rippy, who died in February 1996. Almeda Rippy was born to James Butler Hunt, Sr. and Helena Diggs Hunt in Greenville, South Carolina on May 16, 1919. Her parents worked for decades at the Brandon Mill, a shirt factory nearby. In addition, her father delivered coal and ice, cut hair, raised and sold fruits, vegetables, chickens, and hogs, had a smokehouse, and served for 50 years as superintendent of the Sunday school at Pack’s Chapel and Antioch Baptist Church. From her parents she learned the Christian faith and the virtues of hard work and integrity. She graduated from Sterling High School as class valedictorian and went on to Paine College, Augusta, Georgia, where she met her future husband and graduated cum laude in 1940. In later years she did graduate study at Atlanta University (where she often saw the formidable W. E. B. DuBois striding across the quad), Johnson C. Smith and North Carolina Central Universities, the Universities of Oklahoma and North Carolina-Greensboro, and Harvard University, and earned a master’s degree at Columbia University in 1959. She had a long, distinguished career as an educator, starting with a primary school in Greenville and continuing after World War II with positions in Charlotte. She began at the Billingsville School in 1948 and progressed to general supervisor for elementary schools, coordinator for elementary mathematics (she wrote and taught a series of six programs on The New Math that ran on WTVI from 1967-1972), and curriculum coordinator for the experimental model school. She completed her service with five years as associate professor in the Department of Human Development and Learning at the University of North Carolina-Charlotte. Along the way she was a consultant on math, language, reading, and desegregation with school systems in North and South Carolina. Almeda Rippy was a member of Alpha Kappa Alpha Sorority and Omicron Delta Kappa education honorary. She was on the Board of Directors of the Charlotte YWCA and the Charlotte Mecklenburg Mental Health Association, the Board of Governors of WSOC’s “ Nine Who Care ” community service awards; and belonged to numerous local and national educational and charitable organizations. She was a co-founder of the Monday Evening Bridge Club that flourished for over 40 years. She joined Little Rock AME Zion Church in 1946 and remained a faithful member for 67 years, serving a long period as superintendent of the Sunday school. Her husband C.D. was a national leader in the AME Zion Church, heading the National Connectional Lay Council, and was Chairman of the Board of Trustees when the new Little Rock church was built in 1982. Almeda provided him great support and companionship in his work to strengthen Zion; they attended scores of meetings and workshops in the United States and were delegates to World Methodist Conferences in Belgium and Hawaii. She leaves her loving daughter, Vivian Rippy Ingersoll; son-in-law, John; grandson, Justin Rippy Patterson Ingersoll, all of Atlanta; her youngest sister, Mary Ruth Byuarm of Charlotte; and many nieces, nephews, great and grand-nieces and nephews. She was predeceased by her husband of 54 years, Coleman Dupont Rippy, and her siblings, Fred, Florence, Ellen, and James Butler Hunt, Jr. Almeda Rippy will be remembered for her deep and abiding devotion to her Christian faith, to her family and to all children -especially those in need of love, support, and learning; a philanthropic spirit; a gracious and elegant deportment; a gift for friendship; a quick, hearty laugh and keen sense of humor; and a kindness and warmth that will continue to inspire us in the days to come.

The family of Almeda Hunt Rippy created this Life Tributes page to make it easy to share your memories.