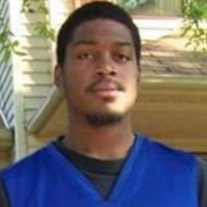 Akeem Daryl Eugene Cherry “A Life Filled with Promise” Akeem Daryl Eugene Cherry passed away at the age of 31 on June 9, 2020, due to complications associated with diabetes at Novant Health Presbyterian Medical Center in Charlotte, NC. At the time of his death, he was surrounded by family and love as God called him home. Affectionately known as “Keem,” “Hakeem,” and “No limit,” by friends and family, Akeem was born in Charlotte at Carolinas Medical Center on July 30, 1988, to Sharon Victoria Lawrence (Cherry) and the late Daryl E. Cherry. Akeem, who is the youngest, was born 38 minutes apart from his twin sister Angel. He grew up in the Tanglewood community. Akeem, who was born and raised vegan by both parents, was an astute athlete, honor roll student, and talented musician. He loved basketball and started playing when he was only two years old. By the time Akeem was four, he was already beginning to master the game. He played on the Derita Basketball Team and was a standout player. Akeem was an honor roll student all through elementary and achieved perfect attendance at Statesville Road Elementary. He then attended Ranson Middle School. In addition to basketball, Akeem showcased his athleticism through his love for gymnastics and track and field. As a talented performer early on, Akeem was a member of his school chorus in both the 4th and 5th grades. When he was nine, he learned how to play the piano and was given a solo during a performance at Spirit Square. Flexing his acting skills, Akeem also auditioned for the Michael Jordan biopic in 1999 when he was 11 years old. Akeem had many talents. Akeem attended both East Mecklenburg High School and Garinger High School, eventually graduating from Genesis Academy in 2006. Although Akeem was diagnosed with diabetes in 2011, he was hopeful and positive with a strong zest for life. Akeem had a generous soul and a loving spirit; he will be missed greatly by those he called friends and will never be forgotten by his adoring family. Akeem will be lovingly remembered and is survived by his mother, Sharon V. Lawrence, and his siblings, Michael Lawrence, Jameka Whitten, Cherish Lawrence, and Angel Cherry. Akeem will also be forever remembered by his nephew, Elijah Hasty, uncle Michaelous Lawrence (Chris), aunt Joyce Lawrence and cousins Mason Smith, Preston Holmes, and Stephanie Hagans. He also leaves behind a host of friends and extended family to cherish his memory. Akeem was predeceased by his father Daryl Eugene Cherry. A special thank you goes to the counselors from Monarch and The Act Team.

The family of Akeem Daryl Eugene Cherry created this Life Tributes page to make it easy to share your memories.

Send flowers to the Cherry family.